The Exhaustion of Diaspora: Part Five - " It's The Pebble, Not The Stream"* 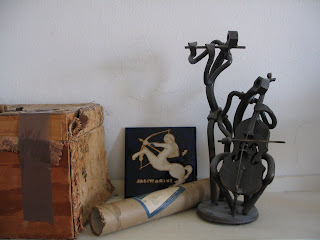 The Blue Sagittarius tile made for Florence by someone named Bonnie:
It lived in the living room for as long as I could remember living with my parents. It now lives in my living room.

The tube with a photo of Florence's graduating class of Julliard:
It was mailed to Monroe Street, when she and my father lived at Knickerbocker Village (pronounced "knickabocka villigsh"). I only found it a couple of years ago. It is going to Louise's.

The metal sculpture of a flutist and cellist from the 1972 Greenwich Village Art Fair:
Our family's version of summer vacations including Louise and I working as Au Pairs to better-off families who could afford beach houses in other parts of the world like the Jersey Shore or Fire Island. I had just finished my first stint for two families, one kid each, sharing a small house. I slept in one of the baby's rooms. I think I made $25 a week. Maybe a bit more but finally coming home and wandering around the fair, I took almost all of the money I had earned from those weeks of wiping baby butts and spent it on this little statute as a gift to Florence. It lived until this Sunday on the window sill of the living room.

The old sewing box:
It held the magic of tiny thin cigarette tins from Mr. Oppenheimer the piano tuner, now filled with straight pins, wonderful piles of buttons each like magic jewels telling a story like the ones I read in Florence's old Lang fairy tale books, and spools and spools of thread. Also in this old wooden box are paper envelopes with threaded needles of black, white, brown and blue thread that I made for Florence when she could no longer thread the needles herself. Louise says, "I remember the day she brought this sewing box home. I thought it was so big." This will now live in Louise's home.


*SOMEONE IN A TREE
(Pacific Overtures, S. Sondheim)

It's the pebble, not the stream.
It's the ripple, not the sea.
Not the building but the beam,
Not the garden but the stone,
Not the treaty house,
Someone in a tree.