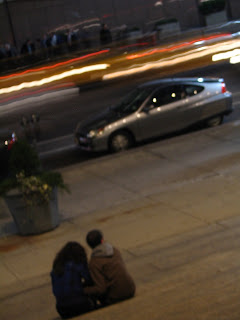 Starting Out: The early 70's. When we still lived at home with parents in different states of involvement. There were no cell phones. There was no texting. In fact, the kid I liked was homeless and crashed a lot at Gypsy's on 2nd and A. So Dating meant meandering fruitlessly around Washington Square hoping to crash into him, along with my friend who was hoping to crash into the boy she liked (he was a male hustler uptown so we never knew when he'd show up).

Once we bumped into the boy we liked Dating was Folk City open mike night (no longer there) or Bagel City on 6th Avenue (still there). When it got dark enough and the park was technically closed Dating became serious, climbing up on top of the forts of the playground built for kids to crawl all over, and groping under coats and pants. After, maybe they'd walk us home, hoping to get an invitation to sleep over - not so much for sex as much for shelter on the living room couch.

The So-Called "Adult" period: It was the 80's. Dating was usually running into him at a bar everyone went to, and then taking him home because our apartment was the best and closest. Dating meant afterward, the nonchalant "oh yeah um thanks, see ya" and then rushing into the dining room to discuss endlessly over cigarettes (mine) and juice (my roommate's) everything about him. The talks were the majority of Dating.

The I'm Settled Down Now period: It was the 90's. There was no dating We were all grown up, having made fast pronouncements at neighborhood restaurants like Arturo's (no longer there) and then living together and being seen as a permanent fixture where our two names were said so often together they mushed together. After the break-ups there were terrible affairs which looked like dating but really was just heartbreak after a documentary or kung fu movie at the Quad (still there), Village Cinema (still there), or St. Marks (not still there)

There Are Other Things More Important period: Millennium. Dating meant knowing that living together was now more about how habits meshed. To find out there were brief dinners, drinks, lots of coffee in cafes (still there), and many, many emails. Surprise. The love must go further than the housekeeping.

"The future is open wide. Dream of better lives the kind which never hate": There's only a sense that time is running out and standing quiet and still once it hits the street. Dating becomes a single word of yes and walking through crisp air together listening to the not-knowing-finding-out of a heart.