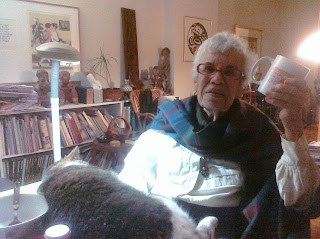 Dana and Polly, the cat (photo by T. Krever)
A few weeks ago as April came to a close, I watched a revived performance of "South Pacific" on Channel 13. Seeing this great Broadway musical by Rodgers and Hammerstein brought tears rolling down my cheeks as I began reliving the time in 1949 when the show first opened and I wanted to see it.

In the 1940's, I was a young opera fan. Whenever Ezio Pinza was scheduled to sing, I was on the standees line, usually for 6 to 8 hours. I was hoping to get a spot behind those with seats during a three-hour performance.

The standing room line began when the opera season opened in November, a chilling, dark month when only an opera fanatic would ignore the discomfort.

When my idol crossed over to Broadway to play the male lead in "South Pacific", I tried three times to get a ticket, but it was always sold out.

Frustration led to trying a last but not too hopeful attempt to see this popular show.

My best friend, Anita and I decided to write a letter to the great man himself! This is what we wrote:

We have been standees attending all your performances at the Met. You brought us great joy. and now you are singing in our language, English. We tried to get tickets several times. No luck. But if you were able to assign a pair of your house seats to us, we would be forever grateful. After the performance, we would be honored to take you out to dinner.

If you find this letter to be an embarrassment, just ignore it. No reply is necessary.

We included my phone number and mailed it to him at the Majestic Theater, never expecting an answer.

To my utter shock, I received a phone call from his representative three days later! He said that Mr. Pinza was charmed by our letter and when did we want to go? I was almost tongue-tied. Then I said, "Any Wednesday matinee." He agreed. Then he added that Mr. Pinza regretted that he would not be free for dinner afterward.

The following Wednesday, tickets were held for us at the box office. They were for Row-AA just behind the orchestra pit.

When we sat down very grandly, minutes before the overture began, one of the musicians said to another, "Hey, look at the Tchotchkalas Pinza's got in his house seats today!"