Sunday Memories - It Was His New York 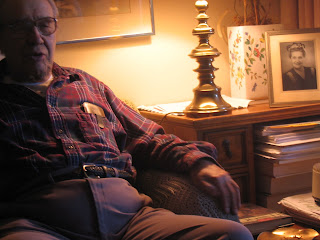 This is Seymour. He's my father. He is sitting next to a picture of Bubby, his mother. My grandmother. They outlasted in both life and in photographs, Poppy, her husband. My father's father. A short man built like an ox and twice as strong and one I have no pictures of.

My father's fear of the rage he inherited from Poppy kept him locked behind many doors inside his apartment and inside his heart. Sometimes, even at the sacrifice of your own happiness, you do that. You lock yourself up so others don't suffer the reincarnation of your childhood. It's not like Dr. Spock or 12 Step Recovery or even eclectic therapies were available in those days. Doors with keys were. Still, regardless of whatever keyhole we lived through, a hot temper embodied by a determined warrior existed with mix results in siblings, cousins, aunts and uncles. I often wondered about that particular fire within me, so different from the one inherited from Florence.

Then just the other day, I received an email from Art, my cousin who investigated our ancestors.

"...your grandfather Abraham...seems he was quite a "cut up" --besides beating the crap out of his kids."

Attached was an article from the New York Times August 7, 1919 edition.

A great crowd assembled in the morning at the East New York shops where they were joined by several hundred shopmen who quit work. From the Point, Superintendent Eagan at 9 o’clock in the morning, sent the following telephone message to Police Headquarters in Brooklyn:

"Gangs of men are molesting our men. Get the reserves in a hurry to Livonia Avenue and the Long Island tracks. One of our men has had his head broken down there and our special policemen cannot handle the situations alone.”

Reserves were posted at that point and the trouble was brought to an end. The first arrest growing out of the strike was that of Abraham Moed 32 years old, of 132 Allen Street, Manhattan, a striker who was accused by Arthur S. Cassidy of the BRT with creating a disturbance at the Atlantic Avenue Elevated Station where he was urging employes to strike.

Oh. Well. That explains a lot.