For Yetta and Beckie

On March 25, 1911, Yetta Rosenbaum, a 22 years old woman who lived at 308 East Houston Street, and 19 year old Beckie Neubauer, who lived at 19 Clinton Street, perished, along with 144 other factory workers, mostly young immigrant women, in the Triangle Shirt Factory Fire. CHALK IN MEMORY OF THE TRIANGLE SHIRTWAIST FACTORY FIRE commemorates each worker who died with a chalk memorial at their homes.

One sleepy, chilly early Sunday morning, Joke and I headed down to Houston and Clinton. We chalked, took pictures, spoke to passerbyers and remembered those young women who probably hoped for love and happiness as they struggled to make a living and a home in the New World. 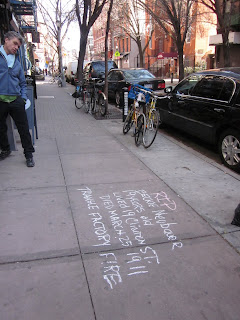 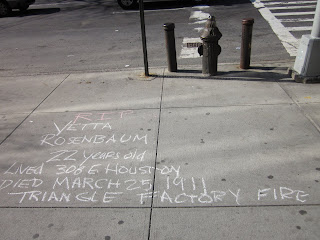 Yetta and Beckie did not die in vain.

From Women's History on About.com
Among the results of the Triangle Shirtwaist Factory fire and the public horror at the disaster:

* municipal, state, and federal association reforms to ensure better working conditions and worker safety
* stronger unions in the garment industry, to bargain on safety and working conditions and to lobby for legislative reforms
* founding of the American Society of Safety Engineers in New York City
* the New York political machine, Tammany Hall, though with a reputation for corruption, embraced labor reforms
* several individuals came to public attention, including Rose Schneiderman, Clara Lemlich, and Francis Perkins (later the first woman appointed to a cabinet position)