A Day On 23rd Street 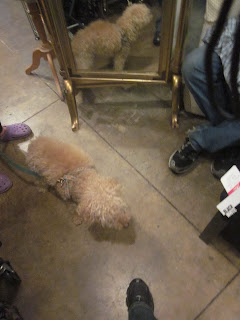 It was the fifth thrift store and like most of the other places, dogs were allowed.

Several of us recognized each other from previous shopping stops where collaborative efforts and group participation was part of the process in making wise fashion decisions.

We were all on the ferocious hunt for something under $10 that made us look like a million bucks, only five to ten pounds thinner.

But finally after patient waiting by full racks, like many two-legged male companions, including the very tolerant one with me that day, Louie stopped for a break.