In The Landscape Of Glass And $5 Coffee, Suddenly Wonderfulness..

Mees was on the corner and EVERYBODY went there for EVERYTHING, not just noodles but if you wanted the best noodles, then definitely noodles.

Standing by the take-out counter (which was also where you stood to eat-in at the Formica tables and rickety wooden chairs) it was mesmerizing watching the cooks perform magically acts as they flew through the air.

Suddenly there would be a container of wonderfulness.  At prices anyone could afford.

Until suddenly, it was boarded up and the building was being rebuilt and we got some menu that said Mees was somewhere on the internet or uptown, but not on the corner.  There was no counter to stand at, mesmerized and anticipating delight.

The building became half-glass, a bit taller, and luxurious and the corner became filled with very delicious coffee that cost almost as much as a container of wonderfulness.

Years went by and that coffee place became almost old.  If you wanted noodles and wonderfulness, well, in this neighborhood, you'd have stand on line at a place most carefully designed  to look nonchalant.

The memory of Mees joined that soft fog of missing everything else.

Until, why just the other day, walking slowly down from the First Avenue Bus with the Mariner, newly minted as domestic partners, a sign that was maybe even a 'sign' of more good things to come, announced a counter was coming back to the neighborhood. 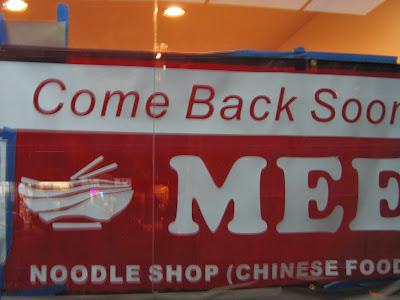 Maybe not at the corner, but close enough.  Close enough to once again walk over and watch cooks perform magically acts as they fly through the air.  And maybe once again there would suddenly be a container of wonderfulness.  At prices anyone might be able to afford.