OK, So He's From New Jersey And Lives In Vermont. But He Still Rocks The Kazbar. 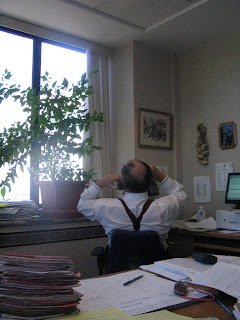 Reprinted without permission from the Burlington Free Press:
BY SAM HEMINGWAY

Judge Ben Joseph said Monday he has decided to retire after 12 years serving as a jurist in courts in northern Vermont.

“It’s time to move on,” said Joseph, 67. “I’ve lost friends along the way. Life’s a short trolley ride and I want to retire while I still have a fair amount of energy.”

Joseph said he informed Vermont Supreme Court Chief Justice Paul Reiber, and Administrative Judge Amy Davenport last month of his decision to leave the bench in June. He is currently working in the Grand Isle and Franklin County court circuits.

“It’s a tough job but it’s been very rewarding,” Joseph said. Known for his array of eye-catching hats, Joseph said he looks forward to spending more time working in his vegetable gardener and playing the violin.

The disclosure of his retirement plans comes just as Judge Christina Reiss leaves the Vermont bench to become a federal judge and Judge Howard VanBenthuysen heads off for deployment to Afghanistan as a member of the Vermont National Guard.

Patricia Gabel, a spokeswoman for the Vermont Supreme Court, said late Monday it is unclear when Joseph’s post will be filled.

“We haven’t heard of anything along the lines of the position being filled,” Gabel said. She said the judiciary has been under intense pressure to keep costs down. Under law judges are appointed by the governor with the advise and consent of the Vermont Legislature.

Joseph said he hoped cost reasons would not be used to delay a decision on his replacement.

“The judiciary accounts for 3 percent of the state’s budget,” he said. “The idea that there is fat in the judiciary budget is not supported by the facts.”

Joseph in the past has voiced criticism of proposed plans to close the courts in Grand Isle and Essex counties as a cost-saving measure.

“The fact that we don’t have enough days and enough resources to devote to disputes is really scandalous.” he told lawyers during a Grand Isle court proceeding in October, according to “Save Our Vermont Courts” blog item on the Internet he confirmed was accurate. “This court surely should not be closed down.”

Joseph’s judicial career has included involvement in a number of high-profile cases over the years, including 16 homicides filed at Vermont District Court in Burlington.

Joseph also presided over cases that led to guilty pleas for two suspects accused in a 2005 double murder in Montgomery.

He drew headlines in 2007 when he rejected a plea deal that called for no jail time for a teenager accused of shooting a farmer sitting in his tractor cab during hunting season. The case was later tried —twice — and resulted in a guilty plea on a manslaughter charge and a 1-5 year prison sentence.

Joseph also oversaw the first of a number of clerical sexual abuse trials held at Chittenden Superior Court in Burlington. Twice, lawyers for the state’s Roman Catholic diocese tried unsuccessfully to get Joseph removed as the presiding judge.

Joseph said he is particularly proud of a program he’s nurtured at criminal court in Burlington to have youths charged with drug and alcohol infractions to undergo treatment as a condition of release, prior to resolution of the criminal case that brought them to court.