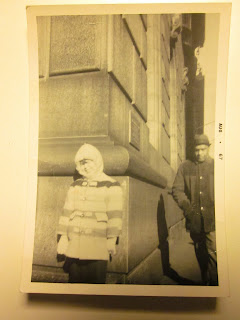 This was my winter coat for several years. A couple of sizes bigger than me (of course) and grown into (of course), my father called this my Joseph Coat Of Many Colors. When the musical came out I became very confused. THAT coat didn't look like mine.

I also didn't realize that Joseph, as a son of the desert probably didn't need a hood on his. But this was how I understood this coat, bought second hand or handed down but clearly a coat that that traveled through other lives before reaching me. I wore it as the mantel of a man in the midst of sibling rivalry but destined to heal his family. This of course led to many years of therapy. 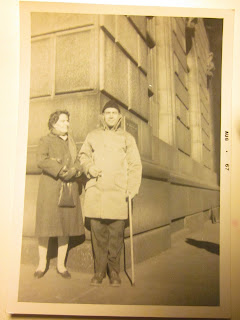 And these were my parents' winter coats. Judging from the angle, I must of taken this picture.

Florence was still wearing winter coats then. I suspect she gave them up around the same time she gave up skirts and men. Her coat was a Harris Tweed bought probably at Macys or A&S or B. Altmans or Gimbels. It was expensive. At some point she relined it. Forty-four years later, it's still in great shape and I wear it. Being shorter than Florence was then, I look like Little Red Riding Hood, only without the hood or the red.

My father's coat was, I believe, a Hudson Bay, also very expensive. Or it could have been an LL Bean. It was his winter coat until he moved to California in the 1980's. It is still in his closet. Just in case the weather suddenly changes. The last time I checked, it was dusty but ready to go. For a brief moment, he and I talked about giving it to my then boyfriend who was unprepared for the North American winters. However, I suspect he clung to that coat the same way Florence discarded hers. A reminder of other times and other weather.