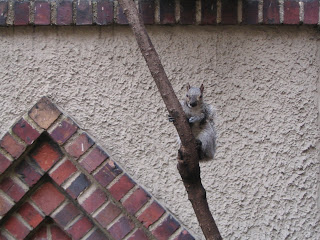 They were exotic beauties rarely seen unless we went uptown to Central Park. I'd squeal and jump up and down at the sight of one, prompting my father to spit under his breath, "rats with fuzzy tails, that's all they are..."

Still, to me they were as magical as the fairy princesses in the picture books. Yet when Mrs. Fass at P.S. 110 on Broome Street gave me my first reader, "squirrel" was the one word I couldn't remember how to read. It was such a foreign concept.

Now, they are all over the city - the courtyard where I grew up, Union Square, Bleeker Street. And all I see are rats with fuzzy tails. Even with therapy, I've become my father.