Sunday Memories-Grand Street: Dialing A Wrong Number Just To Get An Answer 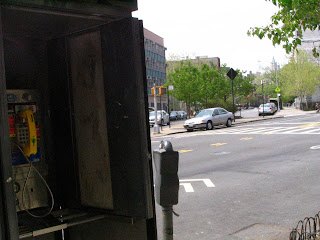 Everybody called her the Phone Lady
.
She had regular rounds up and down Grand Street. Going from public phone to public phone, she’d pick up the receiver and start screaming into it.

Screaming, like the Flood but no ark.  Nobody stopped her or asked her why.  Or anything. We all just stood there and watched or walked by and watched.

After screaming for about five minutes, she'd take the receiver and repeatedly slammed it down.

Like a parent raining down a billion fists rained upon an errant child because they didn’t give the right answer.

A day or so later, the Ma Bell guy would quietly retrace her footsteps and, like a social worker, gently fix each phone.

A day or a week or a couple of hours later the Phone Lady would return and it would all begin again.