The Guarantees Of Democracy: In Memoriam of Michael Brown and James Foley


I wanted the picture of the march through the East Village protesting Michael Brown's killing to leave my cell phone and arrive in my in-box.

But the phone was cranky.

Waiting for email to work, we could hear the police helicopters outside hovering above and siren sounds zooming around the neighborhood like a lasso.

Finally, the photo stopped flying around the ethernet.

It wasn't great but it was the picture of what was happening during a conversation with a kid-of-privilege in bermuda shorts and flip flops and a polo shirt and a pretty girlfriend with just the right amount of glossy make-up. 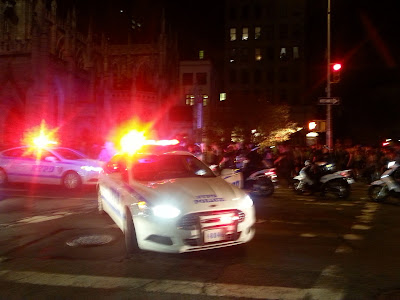 "They're pissing off the cops. But then they dial 911 when they're in trouble. The cops should you, you know, fuck you, give them the finger."

"That's not going to happen," I said.

"That's not going to happen," he said. But he said that like he and I were both disappointed with that. Like the cops should but they won't.

No. That's not the democracy I live in.

"Democracy says I get to assemble peacefully and still be guaranteed protection by the police," I said to him as he walked away with his girlfriend.

I know he heard me, but it was an inconvenient truth. And the march was rowdy, and there were many cops and lots of people were shouting slogans and they were angry and so what….

You want a neat democracy as pretty as your knitted shirt? Go some place where it doesn't exist. Life gets very neat when the noise of free assembly can't happen.

I live in the chaos that guarantees I can protest what I disagree with, the right to pray as I wish which may not be the way the guy next to me prays, and, most of all, the right to write any words I must write.

Isn't that why 10th Street filled up with hands raised in the air for Michael Brown?  Isn't that what James Foley died for?