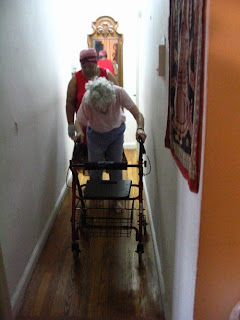 I pull out the new walker Medicaid has gotten us.  None of us are strong enough to hold her up anymore. Especially when she does that I-gotta-sit-down-on-the-floor/sidewalk/doctor’s office/stairwell/lobby thing.

That walker is our safety net. It has a chair and it can hold her weight on its arms better than me or Penny or Gabriella.  Beats calling 911 or the Maintenance Guys to pick her up.

Florence does not see it that way.  She hates that walker like I hated the violin.  And she is seriously pissed off about having to use it.  So I sell it like the masterful liar I’ve become.  If she uses the walker, she’ll get strong again and can then tell me, Penny and Gabriella to go to hell and live by herself again and go to dances with lots of girls ready to foxtrot with her and run up and down Sixth Avenue eating whatever fast food she wants.

With that in mind she grabs the handles and starts shoving herself through space. I shout things at her like You're Doing Great and Let's Go You're Strong Go Florence.

She's as bad a driver as me and neither of us can get the walker through one doorway and into another without banging into walls, the desk, bookcases and every chair in the apartment.

At some point we all give up.  Florences settles into the big chair in front of the TV. I put on THE PARENT TRAP with Lindsey Lohan because I don't have anything left inside to watch SINGING IN THE RAIN for the thirtieth time I just don't. There's nothing left inside.

...and I surrender and put on SINGING IN THE RAIN and Florence sings furiously along, each and every note and soon to hell with Gene Kelly wherever he is in the song.  She motions me to join in and I sing along with her "... in the rain, what a glorious feeling..."

"YOU'RE NOT SINGING IT IN TUNE!" she yells. 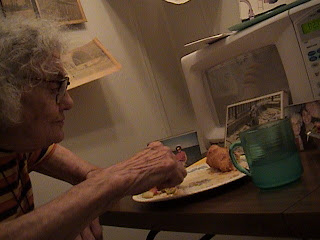 It’s Sunday and I’ve arrived with my usual bags of food from various eating joints.  Penny has successfully cleaned Florence up and gotten her to the kitchen table.

The Jonathan Schwartz show is on and Sinatra pours out of the old kitchen table radio.  Florence sings along furiously along and at some point, to hell with Sinatra wherever he is at in the song, she is in the middle of her own rendition.  She motions me to join in and I sing along with her as I dish food onto her plate.

"I am singing every note in tune! You don't sing in tune!" Florence yells at me.

I don't bother to argue with her that she is in a different key than the radio. Like most recent experiences it doesn't matter what I do. Today all that matters is that Florence needs me to be someone incapable of singing as well as she does, keys be damned. It's the highlight of her week.

Coleslaw shakes precariously on her fork. I hover with a napkin. Florence hates everything she eats, save the coleslaw. That she'll eat without telling me how awful it tastes.

I cut another piece of meatloaf. Hand it to her. Do the mommy thing of "Just one bite come on you need to eat some more..."

She bites. "This is terrible."

It's the third sandwich I've tried on her this week. Nothing works. “How can I make it better?"

I stare at all the pills I've poured into little neat daily piles. The drugs keeping her alive are killing her life.
Posted by c.o. moed at 12:00 AM 0 comments