Going Up The Country Got To Get Away 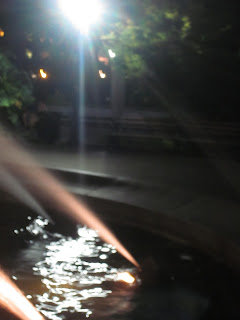 I had high school and college friends who lived there, but it was an island of incomprehensible circles that really didn't quite reach 360 degrees, so if I went there, it could have only been a couple of times and I think we needed someone to guide us in.

Then one night in the 80's someone I really shouldn't have been kissing took me there to kiss.  It was the only place in the city where you could go to in the middle of the night and kiss and because nobody was there nobody saw you.  And the mugging risk was only medium-high

After that fiasco ended, I found myself returning during the day and then other nights and then more days and then soon, if I wanted to get away from the city but not suffer a long commute, I came here.  And soon I took friends and family and the people I got to love, not just kiss under cover of darkness.

These days, the fountain is fixed up, there are tons more plants and flowers and birds and dogs.  And sitting in cool night on an old bench, also fixed up or maybe a new bench that was made to just look old, there are tons of people kissing.

Sunday Memories -The Call of Nature

A Car Ride to the Doctor