A Crutch By Any Other Name


Years ago, Florence broke her leg in an unfortunate accident that involved relatives.  After that, I had a phobia about leaving anything at anyone's house because what if they tried to return it and broke something in the process.  Too risky. 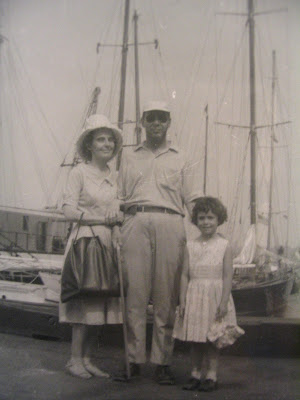 before the leg broke


Florence didn't do much doing those days of a heavy white cast and a pair of heavy wooden crutches.  She went from bed to piano to bed to kitchen, back to piano.  She didn't need to more than that.  She had me to do her serious walking.

Only looking back did I wonder about my many visits the Dry Dock Bank.  For each day I would hand over a note, written in my mother's hand, requesting a withdrawal from her account to be given to me.  Who, I guess, the teller assumed was truly her daughter.

These days, things are a bit different.  Besides debit cards and photo i.d.s., crutches are lighter, casts are flexible and New York is a bit more easy to get around.  Especially if you don't have a kid to do the legwork.

From writer, Adrian Margaret Brune  who grew up in Oklahoma and learned a few things while temporarily "disabled" in New York where she now lives: 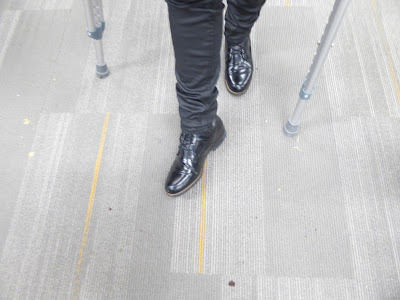 1. Locals are gracious and will hold doors, but don't expect package carrying -- they're going somewhere, too.

2. Subways have elevators, and if someone points it out, it means you're taking too long on the stairs.

3. Crutches come in handy when theatre-goers attempt to steal your cab.

4. "Pimping out" said crutches with extra padding is worth every bit of the $25 you spend.

5. Carpet is wonderfully soft for walking.

6. Despite former athleticism, if someone put a gun to your head, you still could not run; a fast "crutching and ducking" amounts to the best possible outcome.

7. Some passers-by look suspiciously if you are sans huge cast.

8. Riding a train during rush hour without a seat creates a strange sense of accomplishment and pride.

9. The East River will make for a wonderful javelin-style "crutch toss" when all is said and done.

10. Moving freely will never be taken for granted again.