The Exhaustion of Diaspora: Part Two- The Ladies of the Pizza 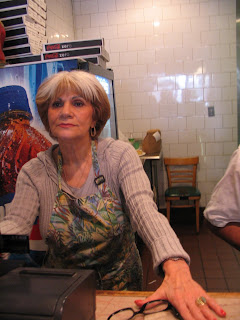 This is Marianne of the Pizza Shack.

First there was Rosy's on Pitt and Grand. Then there was Aldos on the corner of East Broadway and Grand and finally there was Pizza Shack on Columbia and Grand and some other place in the middle of Grand but they also serve dogs and burgers and everything is deep fried so for real pizza you go to the Shack. And if you don't want pizza,there's the the Luncheonette, the Chinese combo-plates-with-grease and a sushi place. I can't imagine eating sushi on Grand Street. Besides, on Grand Street, pizza is the thru-line and when you're packing up your mother's life, pizza wins hands down.

For three days straight I got the fried chicken-tomato pizza. Today an eggplant stromboli. While waiting, I mention Rosy's to Marianne. My co-worker, Annie had grown upstairs from Rosy's (AUGUST, 2008: SUNDAY'S MEMORIES-ANNIE'S SONG) and I still dreamt of a meatball hero like the ones Rosy made.

(Actually I never really had a meatball hero from Rosy's, just bites offered from occasional generous friends. Florence didn't believe spending money for food outside the house so a baloney sandwich was it for lunch.)

Marianne not only remembers Rosy's, she tells me the family still lives in the neighborhood. Then she tells me about Rosy.

Even after they torn down the tenement and built a nice project building and new precinct on Pitt, Rosy still lived in the neighborhood and was a helpful neighbor. One day she decided to visit someone in Staten Island, maybe they were older or sicker than she was (she was pretty old herself at that point). So like anyone without a car which was just about everyone, she took the Staten Island Ferry.

These are different times now. What happened that day might upset us now but I doubt it would faze us much.

But that day was in a different time. There were no metal detectors anywhere. Shootings in schools hadn't happened yet. And if you got mugged you could still have a chance to fight back.

Rosy got on the ferry. At some point out in the harbor, a guy wielding a machete started slashing people. He headed toward a young girl, he clearly was going to kill her when Rosy stepped in front of him, shielding the girl.

He killed Rosy instead.

All I could say to Marianne was "I'm shocked, I'm shocked, I gotta tell Annie, I'm shocked." Since everybody knows somebody who knows everybody, we try to figure out if Annie's siblings went to PS134 with Marianne's siblings. But mostly I'm shocked and Marianne just keeps shaking her head and repeating, "Helped everyone. He was going to kill that girl..."

When I ask if I can take a picture of her, Marianne says how she never likes the way she looks in pictures.

"Beautiful women never do," I tell her.

The pizza gets me through another three hours of packing. It has become the thru-line of these last days on Grand Street.
Posted by c.o. moed at 12:01 AM 0 comments