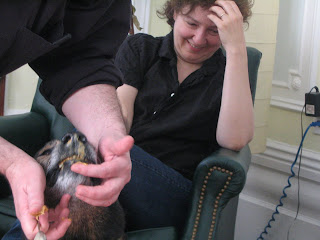 Before she lived here, Dany lived uptown when it wasn't fancy fancy. Just kinda fancy. More importantly, she knew her train lines by their proper names, not what color they were.

Then when she was seventeen, she moved in and learned many things about living downtown. More importantly, she knew which ice cream and cake to get when sodden with one too many drinks. That was many, many years ago and drink, ice cream and cake are now infrequent treats, but she still looks seventeen. Annoying, but true.

Dany didn't do that. Instead she fell in love with tidepools, blew up worms, and is now growing tadpoles with two tails. She is going find the cure for cancer or stupidity... one of them. Or maybe something even more important than either of those.

But, more importantly, she still calls this one of her homes. How we began then is how we continue now. And really, after 30 years, that's all that counts. I mean, beside finding the cure for cancer.... or stupidity.