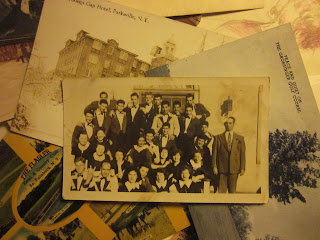 Florence worked at Grosingers, that we knew.  There was a story of her almost getting fired for bringing a glass of milk to a little girl in the meat dining room.  One version has Mr. Grosingers himself chasing her around the kitchen with a knife.  There was another story of her giving a New York taxicab driver her savings to bring to her mother on Hester Street.  Needless to say, it never got there.

She may have also worked at the Youngs Gap Hotel in Parksville and the Flagler in South Fallsburg - Flagler's postcard says it's a country club with a golf course and wooded trails to ride horses on.  I didn't meet people who rode horses until I was a teenager, hanging about a rich new age commune.  I didn't meet anyone who played golf until I was almost 30.

Working at these places Florence wore the starched white collar, black dress of a waitress, not a pianist,   That's her, left side, lower corner, her chin resting on her hand.

She never, to my knowledge, ever got to stay in places like this.