A series about New Yorkers who accidentally got born in the wrong city, but somehow found their way home. 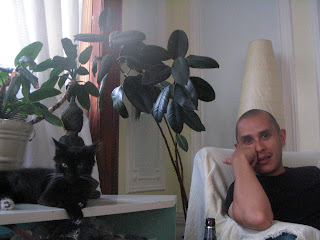 I could never remember he didn't grow up here unless he reminded me about gardens and trees and cars. Had the audacity to move to London. And like it. How I feel about that is unprintable for a family magazine or adult blog.

I was raised within the constraints of a large, stifling, Mexican family.
As a kid I dreamt of being a princess, speaking French, traveling the world and living in New York.

I finally moved to New York in 2001 with a broken heart, no money and no real plans.

The city beat the crap out of me but I fought back.  Eventually, she gave in and decided I could stay.  For 8 years, I had a real life in New York made up of real friends and real seasons.

I met a mattress and lived with a bunny.
I walked over water.
I danced all night and kissed boys.
I walked with Luci to see La Virgencita.
I watched my friends leave.
I made art that traveled to cities I have yet to see.
I became a princess.
I got clowned.
I met Poookie and we drank like champions.
I welcomed my sister to the city.
I fell in love with a monkey.
I became a Master.
I clogged the internet with Claire.
I celebrated life like I never imagined.

I, like many, have my own special love affair with the city of cities.
This is the place where I’ve felt the freest, the most alive, the most accepted, the most loved and the most challenged.

The affair now continues from a far.
I MISS YOU TERRIBLY, NEW YORK.
(I’m not cheating on you, I hate it here…really.)

Kisses from across the pond