Sunday Memories - Once Only a Memory, It Returns 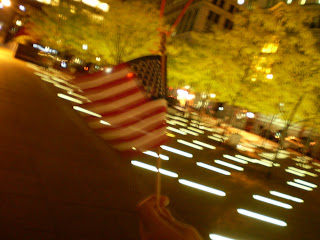 Unlike the daughters and sons of the socialists and communists in my neighborhood, I was taught to stand for the flag and mangle the Pledge of Allegiance like any normal grade school kid. It was a given in our home that the Kennedys were revered and that America was great.

And then, what happened... Vietnam, Kent State, too many assassinations and those god-awful Nixon and Reagan people.

There was no more standing for the flag, and almost an embarrassment of admitting where I came from. And except for one brief moment in the 1980's when I was being arrested for protesting nuclear armament at the US Mission to the United Nations, I never sang the National Anthem. Not even at baseball games.

In 2006 struggling to get home care benefits for my 83 year old, ailing, almost completely blind, incontinent, befuddled, barely ambulatory mother, I spent hours calling government offices, and begging and pleading with overworked, underappreciated civil servants for information and guidance of just how to ensure that in order to keep her safe, fed and clean in her home of 50 years, my mom would not risk poverty or destitution or that her needs would not cannibalize the meager time and resources of either of her daughters.

And each and every civil servant would whisper or murmur or even outright say "the current administration, your president, the laws changed.." and then after all those hours of calls, and a multitude of paperwork and doctor notes, and visit after visit after visit of assessments from social services and medicaid nurses and caseworkers, we were denied services.

I once wrote that when it came to our mother, my sister and I made pitbulls look like pussy. We did get our mother benefits not only because we ferociously fought back, but because those overworked, underappreciated civil servants and caseworkers also whispered ways of correctly answering questions engineered to guarantee rejection.

Sorrow and despair and a familiar hopelessness became a gray soul. I forgot what colors of possibilities looked liked.

And then something happened... never expected always hoped for... like true love when it appears after loss and heartbreak ... the terror of Tuesday night unfolded into a miracle and suddenly I wanted to wave my American Flag and sing the National Anthem.