Sunday Memories - An Encore:
Even The Cat Was Found On The Street

The idea that you can actually pick what you like rather than what is there is the height of luxury. So, an encore after five hours of dragging the Mariner through Ikea and another six hours of weaving new things into a house found on the street. 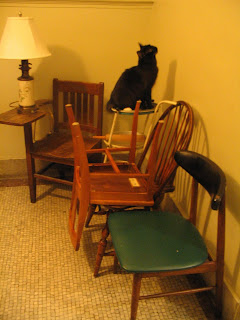 You left things on the street. You picked things up from the street. It was the New York Ikea when Ikea was still just in Sweden and New Jersey.

Beds, chairs, mattresses, bureaus, shelves, knick-knacks, desks, cupboards, plates, cups, coats, even shoes. Florence had many, many chairs gotten from departing neighbors, Coney Island vendors and street corner garbage heaps. I had many many chairs and surprisingly many many tables from departing roommates, stoop sales and street corner garbage heaps.

But now even if the items are left to be taken on sidewalks or by trash cans, even if there is a note that says TAKE ME, I feel a hesitancy, an embarrassment as it were that thirty years after furnishing my first and only home from the remnants of other people's lives, I am still too broke to buy things new.

In the final sweep of emptying Florence's apartment, things have come in and things now wait to go out, this time maybe to a friend, or neighbors.

Or if left on the street corner, maybe to someone still brave enough to pick it up and take it home.

The cat of course stays.

Sunday Memories Of Days Like This That Didn't Include Food Poisoning