The Buddha Has Left the Building 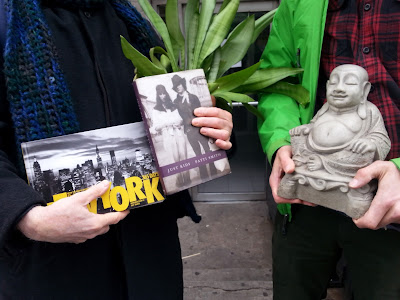 It was one of those moments that only happens when the timing is perfect.

A holiday weekend
Exhausted over-sleeping
A long list of things to do
Deciding to go to the pharmacy first
Missing the light and walking on the 'other' side....

...and there the Mariner and I stumbled onto a small pile of amazing books and two lonely plants.

A guy, carrying a shitload of stuff bounded out of the building.  "Take them!" he said.  He was moving out.  And not just out.  Out and away.

That beats New Jersey by a couple of thousand light-years.

We didn't need to be told twice. They were good books - Just Kids, New York Times photos book, a book about Levon and the Band, David Lynch's meditations - they were the kind of books we would have bought at the Strand.

"Come back later! There will be more!"

When we did swing back around, dragging shopping bags filled with cold medicine and freezer bags, a pro was hovering over the now much-bigger pile of books and magazines.  We knew he was a pro because when the Mariner bent down to check out something, the pro slammed his hand down on it and glared.

"Let's wait for the guy to come back downstairs, maybe get a picture," I said.

He came bounding down the stairs, clutching a big Buddha.

Like lots of musicians and painters and artists and writers, he had come to New York a ton of years ago, lived in just about every neighborhood, and then finally landed on 14th Street.

Been there for like forever, watched the street fights on hot nights, went to every store, knew every store owner (until they all got kicked out because the rent went up), knew the neighborhood, and then one summer he had to get away and Nantucket seemed as away as away could be.

And there he met a woman he fell in love with and then he started this podcast about the island and now there was a kid and yeah, it was hard to leave,  he was defnitely feeling emotional about it, but New York wasn't New York anymore and there was a better, kinder life waiting for his new family in the middle of the ocean where new stories awaited.

The woman he loved whipped out a phone and showed us a picture of the cutest baby in the world.

But, of course.  It would be an honor, we said.  And then I snapped the picture before we all said goodbye to New York.

If you want to hear stories about His Nantucket, Doug Cote's podcast "INSIDE THE WHALE" can be found here.