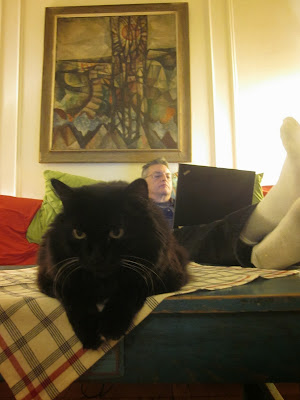 Always knew it was the Williamsburg Bridge.

It hung on the wall by Florence's piano.

Until the bad years when, one night, she threw it out.  My father and I followed her downstairs to the laundry/garbage room on the other side of the courtyard, and after she has stormed off, took it back and hid it out of her sight behind a beat-up aluminum portable closet.

She was trying to erase the horrible disaster one makes when one turns his or her back on their soul.  She was attempting to rewrite her life.   She was insisting on being reborn as who she was.

Soon after, I began my own repetitive diaspora.  Finally landing a new home, I took the painting from its hiding place and put it on new walls.

Years later, Florence, wanting to live again with remnants of her past, requested the painting back.   It went back behind the portable closet, now more beat-up than ever.

And after she died, I brought it back to my now old home.  One of the first things I asked the Mariner to help me with was hanging it back up on the only wall it fit.

Like a relative you suddenly realize isn't just "Aunt" or "Uncle" but an actual person with a real life, one day I looked closely at the painting and saw that in fact it had been signed.

Maybe I was waiting for the internet to be invented.

I found the artist.  Bill Chaiken.   Still painting at 92 years old.  Letters exchanged and I finally found out the story of the painting.

He had come from Winnepeg, Canada to New York to study painting at the Arts Student League.   He got a job at the Henry Street Settlement as the janitor, which included shoveling coal into the furnace early, early in the morning.

On one of those early, early mornings he heard a piano being played, some classical piece.   He followed the sound to the dance studio.  And there was Florence, soon to be married but still living in the tenement on Hester Street with her mother, at the grand piano, practicing.

Thus began a daily morning visit where, as she practiced, he sat and listened to his own private concert.

He had an artist's studio under the Williamsburg bridge, painting the "landscape seen through the lace steelwork".  He may have given the painting to her, she may have bought it.  He can't remember.

All he remembered was those early, early morning private concerts and, of course, the painting, which he was glad to see again some sixty years later.