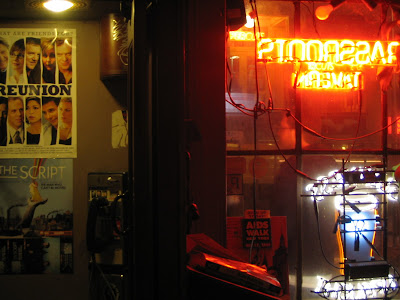 From the trilogy, WIRE MONKEY comes a couple of chapters from its namesake novella!

It’s almost the 1980’s and Bets all of almost nineteen, once again, get jettisoned from the ancestral home on Columbia and Broome. With nowhere to go she returns to her ‘second home’ – the East Village, determined to start a new life, if you call stealing, getting drunk on St. Patty’s day, selling rings door to door, punching your best friend in the face and selling off the family possessions starting a new life.

The Women’s Trans’ Poetry Jam at Bluestockings, started in 1999, is hosted by Vittoria repetto – the hardest working guinea butch dyke poet on the lower east side


**
C.O. Moed was born on the Lower East Side of New York City when it was still a tough neighborhood. A recipient of the Elizabeth George Grant for fiction and a Rockefeller Media Arts nominee, her short stories and dramatic works have been published in several anthologies and literary reviews. She writes, shoots and works a day job in New York City. (myprivateconey.blogspot.com)

Check Mate and a Reading


Sunday Memories: The Journey of a Thousand Sentences Beings With a Couple of Words