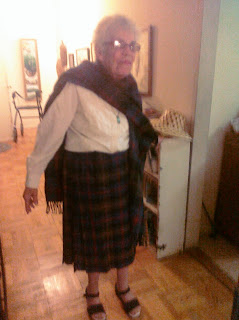 Dana (photo by T. Krever)
The massive doors of the Frick Collection on East 70th Street were my entry into viewing centuries of breathtaking paintings. This jewel-box like museum, once the home of Henry Clay Frick, opened my eyes to English landscapes and portraits of the past. One could almost breathe the country air in the 18th Century paintings of John Constable, born in Suffolk, England in 1776.

One of this great works depicted the immense Salisbury Cathedral settled like a huge, centuries-old edifice on the even larger Salisbury Plain. I was wondering how its interior would feel if I were ever fortunate enough to visit England one day. In my dreams!

Around that time, I played hostess to a delightful English couple, John and Patti, who came to New York City hoping to publish one of John's manuscripts. My contribution became bed and board, no charge. Sadly, they returned home empty handed. Some time later they invited us to stay with them while we vacationed in London. Perhaps my dream of walking into Constable's 1826 painting would come true.

And then it did. But not as any one would have hoped or expected. We were invited to a funeral.

The bereaved family were old friends of our hosts. And to signify the loss of all losses - that of their 12-year-old son - they invited hundreds of friends to Salisbury's national treasure. Showing incomparable strength, they embraced and led their 17-year-old son to the speaker's lectern where he told of the accidental death of his brother whom he had been driving to school Unable to avert a tragic collision, he expressed his tortuous grief, consoled and loved by his parents as he spoke.

I began remembering the loss of my only daughter years ago. She had died two minutes after her birth. I had never seen her face. Yet for years, I had mourned her.

During the Bishop's service I heard the hum of a bagpipe's drone. It seemed miles away in the echoing of the huge cathedral's interior. A hush fell over all the attendees as the dirge of a single piper emerged slowly and penetratingly from the near of the cathedral. He was attired in his clan's tartan and soon passed my seat. His pipes chilled my bones, and I wept.

We all were asked to proceed outside to a large tent where service staff had set out tea and plain cake.

Through the quiet murmur of conversation and little sighs, I stood apart from the others while a light rain fell. No one seemed to notice as they sipped their tea.

The magnificence of the painting had come to life and I had finally stepped within its mysterious interior. But not as any one would have hoped or expected.
Posted by c.o. moed at 12:01 AM 5 comments