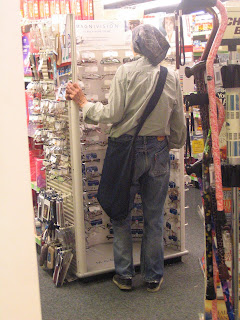 She was staring at all the reading glasses. Only the pharmacist saw me hiding behind a corner and quietly snapping pictures. He didn't to say anything, even though he had that uncomfortable look of 'that's not allowed here I wish I were a manager and could say so." It's possible he thought we were related, both of us dressed like one another and different from everyone else in the store.

"I can't read my newspaper!" she exclaimed, as he pointed here and there. You just knew it was the Times she was talking about.

Perhaps it was all the times strangers stopped for Florence or perhaps it was all the times I wish I had, but I found myself standing at the rack handing her different strengths and styles and explaining and commenting and sure enough she picked the pair with the least bells and whistles and the one most fitting for someone with a soul like a razor and a face that defied the contradiction of age and beauty.