The Beholder's Eye Is Not For The Squeamish

Warning: The image below may be upsetting.

Today will be the last time I think Florence is looking at me.

The upheaval of emptying closets and preparing to vacate the apartment unearthed the bag of her eye stuff I had stuffed into a corner hoping it would disappear on its own.  The only time things disappear on their own is when you are looking for them.  The things you want to forget stay stubbornly in place waiting to piss you off and freak you out.

How to explain this piece of glass except to say it isn't one.  It is, if anything, the portrait of my mother, still as vibrantly alive as when it resided in her empty socket. 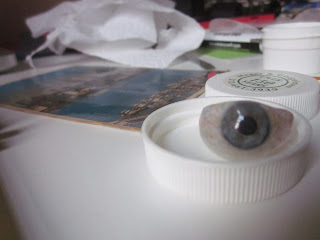 As a little girl, I didn't know this eye couldn't see.  All I knew was that Florence slept facing her bedroom’s doorway with one eye half opened.  I thought it was to make sure I didn't slip past her on my illegal expeditions around the house after bedtime and before breakfast.  I liked the house when nobody was up.  Unlike the angry silences or not so silent anger when folks were up, before breakfast and after bedtime offered rare peace and a world of possibilities. Worth the risk.

Peeking into my parents’ bedroom, I'd stare back at her and if she didn't say anything, I'd wave, just to make sure she wasn't seeing me before scooting past her and into wonderful quiet, empty rooms.

My illicit activities didn't end there.  One day, left alone in the apartment while she and my father were out and about, I, desperate to understand yet an angry silence between them, went through all their drawers and closets.  Spying two beautiful ring boxes in Florence’s underwear drawer (right next to an odd disc made of rubber), I eagerly opened one, hoping for something special.

There she was, staring back at me.

On walks home from TV night at  Gramma's in Knickerbocker Village, my sister and I would ask, "What happened to your eye?"  But Florence never answered.  She'd just glower and continue striding down Madison Street.  Later, my father would tell us her father, whom she never spoke to, said she was born with something wrong and that she was in the hospital a long time and not allowed to see her mother.  Hospitals did that in those days. Fearing it would be injurious to the little kids to be with their families, parents weren't allowed to visit their children for months.

But, years and years and years after that, putting out the fires dementia makes, for some reason, I had to call the place that made her eye.  So, while I had them on the phone I asked, "Do you know what happened to her eye?"

"Well, she said it was a gunshot accident,” they told me.

I think she was pulling their leg.  Although it was plausible.  Florence spoke of her neighbors in Bushwick, Brooklyn knitting hunting mittens.

When they first met, the woman Florence loved her whole life didn't even know that eye was glass. All she knew was Florence's hair hid half her face.  That woman, just introduced but knowing something different was happening, pushed the hair to the side and told Florence, "You look better this way."

There were also gentle moments of care when, in public, one of us daughters would whisper "Wipe your eye" if it got too cloudy.  But that was as close as my sister or I ever got to Florence even admitting there was anything wrong.  Even at the emergency room of the Eye and Ear Hospital at 2:30 in the morning, it was I who had to tell the attending doctor the eye that didn't have cataracts was glass.  Florence just sat there tight lipped and furious he dared to even investigate.

So determined to defy and deny her lack of sight, that when coming home from an operation on her one good eye which was completely bandaged up,  she pushed my hand away as we entered the Quartchyard and pretended she was seeing through her glass eye as she literally walked blindly to her lobby door.

However, that last year of her life changed everything.  Like a child needing to hold hands with her mommy after a tough day in the playground, Florence began asking me if her eye was O.K. and could I fix it.  After fifty years of that piece of glass being a wall between us, putting her eye into her empty socket and adjusting was probably the most loving thing I have ever done for her.  The Rubicon had been crossed. By both of us.

Sunday Memories: For My Sister's Birthday

The Lionesses Rule The Pride

The Land Of the Quartchyard