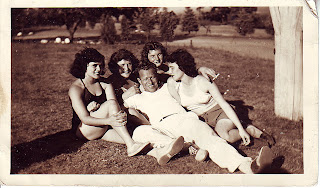 Florence (right side of guy) on her day off at Grossingers'
During the late thirties and throughout War World II, Florence worked as a waitress. For someone who loathed domestic work, was a terrible cook and, although charming, wasn't exactly a people person, her choice had more to do with what was available to a young woman in those days rather than what she was good at.

Yet those years of serving procured her a bicycle on D-Day or V-Day or one of those victory days, and the Steinway piano she lived in until her death.

Years later, after a divorce severed a steady flow of money, Florence was suddenly faced with new financial matters as many women of her generation were when traditional structures crumbled.

As she stumbled to her independent feet, one of her first jobs was stocking cans at a supermarket and handing out teacher-evaluation forms at Hunter College, a school she attended for her Bachelors'. With a few more private students, she kept herself afloat.

The menial jobs were nothing to her. They were there for only one purpose. To support that daily battle of sitting down and being what she was - an artist.