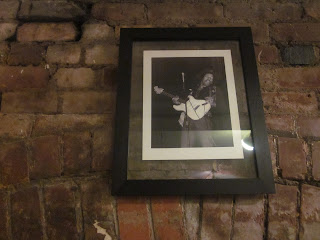 Jim Hendrix moved to New York when anyone not rich could.  He knew the East Village streets were where he would continue becoming who he was inside.

Uliana also moved to New York when anyone not rich could.  She knew the East Village streets were where she'd continue becoming who she was inside.

Before she headed east and village, a friend gave her this photo of Hendrix because he knew she loved Hendrix.  Where ever she lived in New York, it hung on her wall.

She was a sculptor, a painter and a magician when it came to hair.  She'd eye your head, pick up those scissors and brilliant music would pour out into the world.  Afterwards, you'd look in the mirror and see how you were always meant to look like.  It's just that before Uliana touched you, you had never seen it.

Real estate and life and years and the East Village changing, at some point Uliana needed to move her Hair Salon to a new location, but she didn't want to move off 9th Street.  A real estate agent showed her a basement space only a couple of doors down.

Uliana didn't know what it was, but something about the space felt just right.

"Did you know Jimi Hendrix used to live here?", the real estate agent told her.