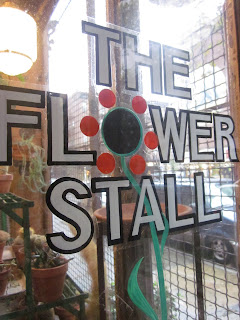 In the meantime, settle in, get comfy and read Part Two of the story of how such a simple request to acknowledge Cornell's 43 years of contribution to New York City came about.


"You helped turn this neighborhood from a war zone into a community." - Lynn (Her father was a well known African-American clarinet player, and their family lived down the street from the Flower Stall. Cornell gave her brother his first job helping out in the store. 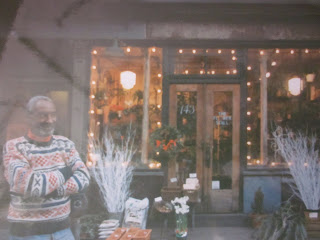 Cornell and his Christmas windows

However, somethings went well. In a neighborhood rife with crime, Cornell never got robbed.

So with some agricultural leanings from the one side of his family still farming in North Carolina, and armed with a degree in English from NYU, Cornell set about doing what he had to do, starting with the tome of all plants tomes, Exotica. "Self-taught," Bill said.

Soon the plant peddlers, mostly from New Jersey and Staten Island, who serviced plant and flower stores from their trucks found Cornell. Every week or so they'd pull up their trucks and show their wares.

But it was the Manda Brothers that changed everything. Famous horticulturalists educated in London the three brothers' New Jersey greenhouse, established in 1910, was legendary. And even better, it was accessible by public transportation, an important detail since neither Bill nor Cornell owned a car. Cornell began to do business with them which would continued for decades until the brothers retired. After his visits to pick out items for The Flower Stall, the Manda Brothers' old 1936 pick up truck, painted green with house paint, would swing by 13th Street and drop off his order.

The shop was now open and thriving, with a specialty of exotic and colorful plants. Bill remembered a day when Cornell bound up the stairs to their apartment, excited about selling a bromeliad for $4.50.

There was also a special hi-fi system from Bill's college days in the store. Those were the days of tubes and wires and sensitive dials you had to tune carefully to get your station. Digital hadn't been invented. The old system sat on the wooden counter. Because the 10 watt Bell amp ran hot it needed to be turned off every night. Well, one night, Cornell forgot to turn it off.

The next morning Fire Station #3 from down the street was on its way to another fire when they saw the smoke pouring out of the store front. They couldn't stop because they were on their way to another fire and that was the law. So they called Fire Station #5. But #3's fire turned out to be a false alarm, so they headed straight back to Cornell, shooed away #5 and took care of things.

However, everything inside the store was destroyed. Counters, equipment, fixtures. As well as every single plant.

Perhaps a week or two, later, as the store slowly got fixed up, the Manda Brothers' old 1936 pick up truck painted green with house paint pulled up to the store. Before you could say 'bromeliad' those brothers jumped out, restocked the store with every possible plant imaginable, jumped back into the truck and drove away.

And it wasn't just the neighborhood looking out for Cornell. Cornell looked out for the neighborhood. And he didn't miss a thing. Like a sudden increase in odd activity at a certain doorway. People coming and going at short intervals but too short a time for brothel business. A simple question from Cornell to the owner of the building - "What's going on?" - quickly slowed down the growing drug business. "He didn't say much, but his words had terrific power," Bill noted.

There was also that time when Lynn, then in high school, decided to cut school one day. She headed down 13th Street to illicit teenage freedom. Catching Cornell at the doorway of the store she ducked down behind the cars and made a dash to the corner. Just as she got to the end of the block, there waiting was .... Cornell.

The teenager Lynn was not happy at all. But the adult Lynn knew the precious value of a neighbor looking out for the kids in the neighborhood. Like many of us who were running a bit too wild on the streets, those moments reminded us caring eyes who knew our mothers and fathers were keeping us in line and keeping us safe.