Robyn -- writer, actor, public presentation coach -- runs SPEAKETC.COM and has lived in New York for almost 30 years. I have yet to walk down any street with her and not see her run into someone she knows. Once in a single block stretch she said hello to seven different people. 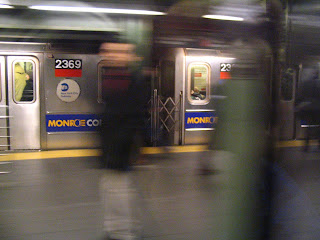 The other day I saw an amazing communication on the NYC Subway. I was headed uptown. The train was crowded enough that I had to stand, but not the suffocating type of crowded that makes you question your sanity. A very tall African American man started walking through the car. Let me pause to let everyone know that I am African American. Anyway, this tall gentleman had the distinct body language of someone who wanted some kind of interaction/altercation. And for those of you who may question this observation, don't. I'm really good at body language and don't make these assumption lightly.

As this same man passed by me, my umbrella touched him and he jerked around to stare. I, being the well seasoned New Yorker, did not make eye-contact and I felt him decide that he wasn't going to pursue that particular altercation possibility. As he walked by, I eyed him carefully, wondering, dreading, who he was going to "mess with” cause I and everyone else in the car knew, he wanted to "mess with” someone. Most of the other riders in the car, did what I had done earlier and focused their eyes anywhere but in his direction. All except one.

A slightly vertically challenged Caucasian guy stood balanced in front of the subway car door facing in. The black guy stopped and stood directly in front of him. Facing him, staring at him. If the white guy looked down, he'd be staring at the man's crotch. If he tried to look any other place, it would be far too obvious that he was avoiding eye-contact and that would smack of fear and vulnerability. I sucked in my breath. I dreaded what might happen next. BUT, before the black guy could say anything or send out too many hostile vibes, the white guy, noticing the black guy's cap said: "Bronco's fan?" And what do you suppose the black guy did?

He began to grin from ear to ear. He raised his arms, and did a little dance around the car. The riders who'd been avoiding eye contact, started to look up and smile. He let out a whoop about the Broncos and he and the white guy engaged in a passionate discussion about football, Denver and the recent game. The subway reached its next stop, the black guy got off but not before giving the white guy a high five and parting advice about his team. I felt like I had witnessed one of the most compelling demonstrations of the basic idea behind Nonviolent Communication. (NVC)

NVC believes that people take action based on universal human needs. Sometimes these needs lead to positive actions, sometimes they lead to negative actions but the person is just trying to get a basic need met and will use any strategy available. I feel like this African American man had the need for connection. He wanted to connect to another human being badly. One strategy he was used to using was intimidation but that day, on that subway, a very confident, compassionate (or perhaps naïve) individual offered him another way to connect by offering him conversation about a shared interest.

The white guy and I got off at the same stop. I hadn’t realized it, but his girlfriend had been in the same subway car seated across from him. They got off chatting as though nothing unusual had occurred. I wanted to say something. Ask him how conscious the decision he made had been? Let him know how impressed I was with his ability to deflect a potentially uncomfortable encounter into a conversation. But I didn't. I didn't want to draw attention to something that had seemed so natural to him. I just hope that I can remember and learn from that example.