A photo taken of Dana as she read to me this new piece. 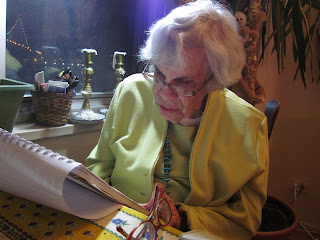 Diana was the glamorous girl of our set – slim, elegantly dressed in classically tailored clothes made for city doings. Her soft grey hair was tucked into a black beret and her boots were impeccably polished. Her regal posture was the result of strengthening her back for “la danse”. Ballet was her life until she retired, although she never offered personal details of her own story.

She mainly talked about her dance career and the beauty of attempting to reach perfection. She encouraged the rest of us old gals to constantly exercise in order to maintain our balance and lose weight. As we struggled through our 70’s and 80’s with our canes and walkers, she was a real contrast to us all as well as to herself. Usually dressing in black turtleneck sweaters or white ones, her head looked misplaced. Incorrectly sitting atop a youthful frame, her head seemed to belong to a much older woman. She decided to volunteer at Lincoln Center to accommodate bewildered patrons. Eventually she became eligible herself for unsold seats to musical or dance performances.

Her chief defect was her poor neglected teeth; she had long since lived on a pitiable income requiring her to survive on Social Security checks. Her diet consisted of canned soups and snacks. Like many living so fugally, her beloved orange tabby cat Rothbart, named after the evil conjurer in “Swan Lake”, ate much better. To quell her appetite, Diana ate hard candy. From time to time, each of us would attempt to invite her out to lunch. We usually met for a monthly Chinese lunch to celebrate our various birthdays. When Diana decided to join us, she would order sparingly.

A few months ago, at four in the morning, Dian felt the symptoms of heart attack. She managed to open the front door and lie down in the hallway. Then she rolled over and over until she reached the door of a familiar neighbor who awakened and drove her to Beth Israel Hospital’s Emergency Room. We all began calling the hospital as well as at home trying to find Diana. Jean of our group found her in her hospital room. Diana asked her visit again soon and to bring pen and paper and a small bottle of Chanel #5. Diana also commented on how delightful it was to get three trays of food daily delivered to her beside. She did miss her beloved Rothbart, now housed with her neighbor.

Once again, we lost touch with Diana. Then word came from a co-worker at Lincoln Center who had tried to locate her. “Diana is no more. Probably a follow-up heart attack.” We were all grief-stricken. And we all felt guilt pangs that we had let her languish in the hospital and then didn’t follow up on where she might have gone afterwards. Hospitals in New York City close a case record when the patient is discharged. Germany, on the other hand, keeps a police registry of every citizen’s change of address.

Several friends and I met a month ago to have an impromptu memorial. We talked about our lovely colleague whose passing was unexpected and, of course, foretold our own.

It was almost Christmas when Jean called me to say she had just opened her mailbox and jumped when she saw a letter from Diana. Diana had been in a rehab facility for weeks and had made enough progress to be sent home, blessed home. The mild heart attack healed well but she also had needed surgery to remove a defective toe. In rehab, she had to learn how to use a walker and a cane.

We had been so shaken by the awful news of Diana’s death that we were scarcely able to believe she had returned to our lives again. We almost resented being emotionally rocked for no reason, but decided to marvel at the turn of events and never mention it to Diana. Diana, having located her address book, felt a surge of longing to join her old friends again. She never realized that she had emerged from the chrysalis of an iconic departed ballerina into a newly reborn old woman, just like us.