Sunday Memories and Secrets: I Want To Hold Your Hand 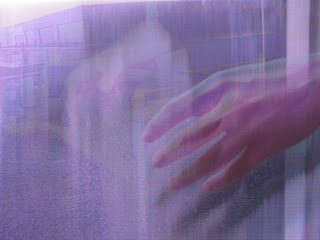 This is the last secret a man told me in a car.

It was the early 1990s when New York was still New York City and I still belonged here.

Unless it was life saving - like going to work to pay the rent - I had stopped leaving my apartment.

Every morning a desire to die would slammed into me and leave me unable to pull on the latex body suit of chirpy-supportive-sister-sledge-we're-all-family-let-me-support-you-with-your-dreams-girl bullshit personality I had worn for quite some time. I knew I had been me at my birth, before I became what everyone needed. But I didn't have a clue how to get back to her. So I lived in that bleak despair. Every day. Every night. Very little relief. Not even eating helped.

Then a friend's husband started leaving messages and sending letters and then leaving more messages. He was giving her a surprise birthday party at their suburban mansion. She was turning some big age like forty and no expense would be spared. He would even arrange for a car service because I just had to be there.

And he was right. I did have to be there. This woman had saved my life many years ago. Not by pulling me out of some ocean or taking a bullet for me. She had just made sure I got taught to protect myself. I owed her my life and I owed her my presence and that meant leaving my house.

It was the first time in a long time I was around people and I not only got through the night without a psychotic break, I even gave a warm birthday toast. Something about licking stamps and making a siddach.

True to his word, the husband had hired a car service to take a bunch of us back into the city. A gaggle of self-important women filled the back of the car. So I took shot-gun. I listened to conversations that seemed vapid and cruel and clanging and wondered if leaving my house had been worth it. One by one the driver dropped them off in neighborhoods I would never be able to afford to live in.

To be polite, or to counteract the unpleasantness of the other passengers, I asked the driver if he enjoyed driving for a living.

He answered that driving his own taxi in the town he lived in allowed him to always know what size shoe his kid wore. I probably exclaimed something like wow or brave or huh.

And then he said, "Well, I died once. And when I came back I decided to change things."

He had been working security at one of the fanciest hotels in mid-town. There was a jewelry store in the basement promenade. One day in the afternoon an alarm sounded. Someone was robbing the jewelry store. He raced down to the promenade and ran smack into the robber who then shot him point blank.

At that moment he looked down and saw his body and the frantic efforts to save him. Then he saw the corridor and the light.

He rushed towards it because it felt really good and he could hear all his relatives on the other side of the light and he couldn't wait to see them, his favorite aunt, his grandmother, her grandmother, his entire family from the beginning of time. But just as he was about to go through they all said, "No." It wasn't his time. He had to go back. He'd see them again when it was right.

That was the moment his heart began to beat again and EMS shouted many things and he was rushed off to the hospital.

By this time, we were parked at the corner hydrant by my building. I suddenly had this great hope that if I took his hand, touched him, somehow his life would pour into mine and I'd be able to return to the land of the living.

The second I thought that he said, "I don't know why I told you that story. I rarely tell anyone. When I do, they always want to touch me."

I sat on my hands.

For the first time since I fell apart I thought about what, if anything I might have to offer another person that was uniquely mine to give, but wouldn't kill me if I gave it.

He started talking about his wife's brother. The brother had just died. In those days it was still called the "gay cancer" and rumors ran rampant - you could catch it from toilet seats or using the same plate or standing next to...

No one but the driver's wife and and the driver had been willing to love and care for the brother as he got sicker and sicker. Now the lover of the brother was sick.

The driver spoke heartbreak and he spoke alone and he spoke my days in and out. The journey through despair. I knew what I had to give and I knew giving it would begin my life again.

I reached over and offered my hand.