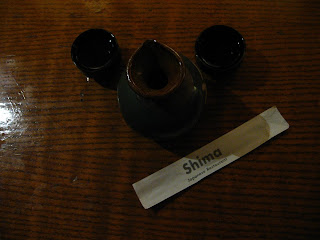 A week of chasing cow and pig with one or two chickens thrown ended in exhaustion and a slow trip across the street to the good but not silly expensive Japanese restaurant.

It was her annual trip.

Already someone, a New Yorker of more than 50 years had, in hopes of luring her home, told her about an apartment in Brooklyn. "Williamsburg! and the ceilings are 11 feet high and the rent is only $750!" Such deals are murmured as if it were World World II and the Axis powers train lines were going to be bombed.

She pondered over squid legs and crunchy eel if moving here from the cornfields would dampen inspiration. After all, when she did her annual visit she often went to more Museums than I had all year.