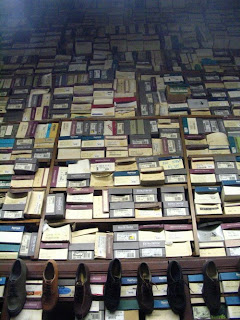 There was a cat clock that wagged its tail and rolled its eyes to each ticking second. Very exotic compared to our bare-bones kitchen clock.  The almost leather seats were burgundy-something. The so-called carpet was dusty and the lights were, of course, florescent. Only uptown stores where rich people shopped had real lights.

Kaplan's Shoes - on Clinton between Rivington and Stanton.

We went there for our once-a-year-(ugly)-pair-of-oxfords that wouldn't become hip and fashionable for another twenty years. In the interim, the meaner girls at P.S. 110 in their white go-go boots called me "baby shoes" which is devastating if you're only 8 and suddenly in the 4th grade with the bigger kids.

Florence's rule was whatever ugly oxford you picked at Kaplan's you had to wear out of the store. This showed commitment to the shoe you'd be with all year. And, since that and the sneakers from Sears & Roebucks were the only things we bought new, you had to really know if the shoe fit.

The pressure was tough. But those ugly oxfords were made so good and Mr. Kaplan's measurements were so precise, somehow everything worked out.  Except for the part of looking like a dork from a-turn-of-the-century picture by Jacob Reis.

I spend the next forty years wearing shit that looks hot while avoiding any shoes stores that sold anything that was comfortable and good for your feet.

But there is a God and She does wear lots of shoes because ugly came back into style and was even hipper than hip, especially if the jeans were tight.  It was perfect timing. My feet were old and unhappy.  It was time to find a place where the oxfords were made so good and the measurements were so precise.

And when I walked into the dusty shoe store on 39th Street, it was just like being back home.