As new lands appear in the horizon, so does a bridge to walk there. 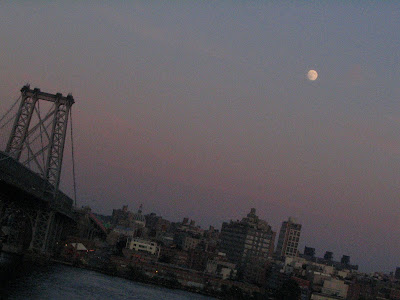 This is the Williamsburg Bridge.

There was a bathhouse underneath it on Cannon Street and everyone in the neighborhood went to it.

We grew up across the street from it in one of the first buildings in the neighborhood to have elevators and bathrooms not in the halls. We would walk across it but never get off in Brooklyn. It had a concrete walkway with low railings and lots of broken things. Florence would panic if we leaned over too far.

During Christmas time, I'd look across it to the housing projects on the other side and count the holiday lights blinking in the windows. They were exotic promises of another kind of life. One definitely with more candy and presents.

It fell apart during the Koch administration.

They rebuilt it after to be prettier and stronger.

Adrian walked across it all the time.

I walked across it with Adrian and it was different from when I remembered - it was nice and pleasant, not the barren concrete but the comfort of a pedestrian walk welcoming strolls and bicycles. I don't think people even got mugged on it that often. Walking across this time, Adrian and I got off in Brooklyn and had a burger. Then we walked back.

And just the other day Dana insisted I go out on her balcony and take a picture of it and the moon. And I stood there wondering about all the bridges we have to cross to new lands and other points of view.