Another Visit From Another Her New York 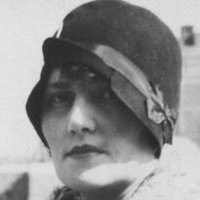 The Face Beneath The Hat
By Chelsea Dreher

Ilona had possibilities.
New York had 34th Street
Ilona had her studio

Ilona came to New York from Hungary in the late twenties.  As soon as she saw the city from the boat, she wanted to go back to the vineyards and mountains.  She lived in Harlem with her brother, Herman and made paper flowers on the Lower East Side for $4 a week.  This led to a career as a designer with a business card. Heady stuff for an immigrant single lady.  Famous hat makers used her handmade flowers on hats and gowns. She was my mother.

She married, gave up her 34th Street studio and had me. Our little family moved to the Bronx where there were parks.   I moved to the Village when I was seventeen.