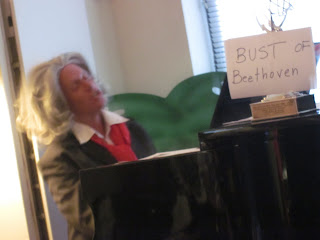 The thing about growing up under a Steinway is that the music is as intimate as the air you breathe or the punches you exchange with any given sibling. It's just life.

But I didn't like that life that much and took much delight as a young adult corrupting any beloved piece of either parents by inverting its key. This meant a sober, sad sounding piece would at the turn of a single note become a happy beer-drinking polka, and the trolloping joy of a sonata or symphony would just as easy become a funeral dirge. This elicited rage and reprimands from both parents who revered the great works and the great composers. Such responses of course only elicited more delight from me.

However, at some point it's just not nice to piss off an old person, especially one you are related to. So I stopped messing with their music, and other than an occasional indulgence of PDQ Bach's play by play of Beethoven's Fifth Symphony I moved on to disco, funk, salsa and rock.

If only I had known there were others like me. Luckily, like almost all things in life, it is never too late to find kindred souls. One perfect sunny, windy, beautiful day, friends and strangers crowded into the small theater of Nancy's living room for a dress rehearsal and went on a wild ride with Ludwig van Beethoven as he attempted to right wrongs, settle the score with Mozart and terrorize a stage manager into being a cast of thousands.

at the Seven Hills Inn in Lenox, Massachusetts