University Of The Streets: Millenium Style 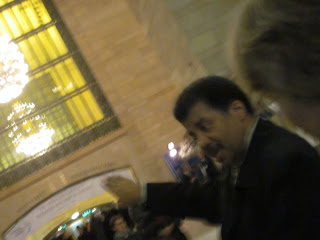 It used to be you learned from running around the city and taking a good look at it. Florence would whip on her glasses and stare if there was something she wanted to know.

Then the the city got nice and the streets got safe. There was nothing to learn on them except how to zip around a gaggle of tourists clogging the sidewalks or the new residents who, like the tourists, clogged the streets but at least shared with the world interesting cell phone conversation.

So imagine the delight and the wonderment when the best scientist in the city, and thus the world, gave a small group of important looking people a 101 overview of astronomy, a course I had failed at least twice at City College. He did this while interweaving the history of pollution into the stars and telling us how Grand Central Terminal wasn't a station but a terminal.

I don't care if I don't understand what the Earth Wobble is. I'm just thrilled that, like Florence, I stared in delight and without an invitation stood close to learning something new on the streets.