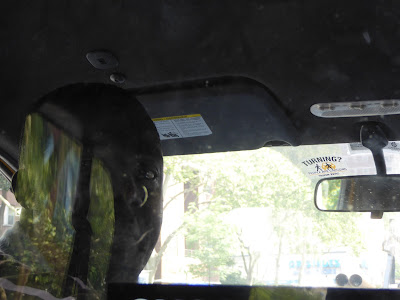 It happens only once a year.

Jupiter, the 18 pound plush monster-cat,  needed to get his fur all shaved off.

That meant shoving said beast into a huge plastic box, which has a handle on it to give the illusion a human being could actually pick the box up while there was an animal in it.  No, you cannot.

I get that one's arms are too short to box with God.  Mine are also definitely too short to carry this plastic box.  So,  getting to the corner of the street headed west to shaving-it-all-off-land looked like a scene out of Benny Hill, only not as funny and dangerous to anyone within a 2-foot radius.

Holding the box, jumping out of the way of marauding cars turning right at 90 miles an hour, and watching a sea of yellow cabs whoosh by already filled with paying customers, my heart and my arms sank.

Until this bright, shiny, new, van-like taxi flashed lights at me from all the way on the other side of the avenue and then somehow, without crashing into anything, cut across four lanes of traffic to pull up to the corner.

Mr. Emmanuel A. from Ghana.

Usually, taxicab drivers just want to know if their back seat is going to be the same after you leave.

But sometimes, slipping into the back seat of a cab is like a homecoming, like running into your neighbor of 40 years at the supermarket or bumping into an old pal at the bar.

And it was no different stepping into the chariot of Mr. Emmanuel, who immediately wanted to know all about a now VERY unhappy feline banging about against plastic walls.  And also if I could direct him to where I was going as he had only been on the job for a month.

In Ghana?  Mr. Emmanuel just rolled his eyes and then told short horror stories of bribes and injustice.

But back to more wonderful and happy things to talk about!  He loved animals!  Because back in Ghana he had been a farmer with a degree from the university in animal husbandry.   And yes one day he would like to practice that here, maybe even in New York.

Was there anything he missed, I asked.

Leaving his animals, he told me.   Including his 22 ducks.

The way he said that, like other times of hearing necessary diaspora, hurt-openned my heart a bit bigger.

Before dragging out the plastic monstrosity to the famous Elly and her magic shaver, I told Mr. Emmanuel he must, he just must get his animal husbandry license here.

We need more citizens who hate corruption and, instead, love their animals, especially their 22 ducks. 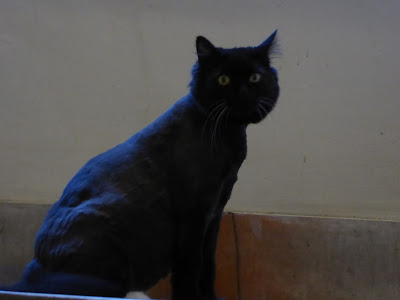 The end result:  Jupiter with a "lion-cut" which actually makes him look like a small poodle.

Your Arms Are Too Short to Box with God

The Exhaustion of Diaspora - Part Six: Home Where My Love Lies Waiting

Townehouse Grooming
Posted by c.o. moed at 12:00 AM 0 comments