1962 on Delancy and Willet by the Williamsburg Bridge 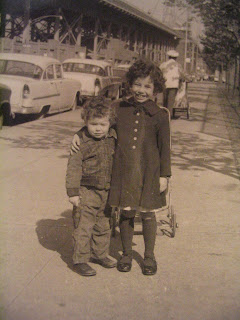 ... we stood there in clothes for spring's cool weather but it had to be near summer the Good Humor man had just walked by ringing his row of bells I know we didn't get any ice cream we never did it just wasn't allowed I remember that day and now I wonder what Florence wanted from that picture she was one of the older mothers in the neighborhood it just wasn't done then to have two babies after 30.

Then the stroller was stolen...

... stolen from outside the Hamilton Fish Library on Houston and Columbia Florence repeatedly fumed for decades that the day's mail had been in the stroller and thus had been stolen with the stroller and now I wonder if maybe there had been a letter in that mail she had hoped to read alone later when her life she'd didn't want wasn't bugging her for food or love or care.

And after the stroller was stolen...

... Florence said she looked down at me, three years old already knowing something was wrong still willing to cry about it Florence looked down and said, "Walk."

No new stroller was bought or considered or borrowed and I learned to not know something was wrong be cheerful instead and the many miles my family walked throughout the city I walked along side them.

It's been decades and I still walk that stretch of Delancy I walk it intimately as if it were a lover by my side it is a rare patch of home where not much has changed except for a couple of things.

The Good Humor man has been replaced by freezer cases in bodegas and now I can admit something is wrong.