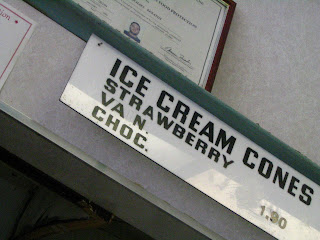 Right past the ice cream sign. In a corner nobody can see in the new luncheonette now painted nice and white and cheerful. A splotch of brown.

That's what's left of the first luncheonette. Brown walls and moldings and red-brown stools...Aladdin's Cave, safe and dark, a passage way in to something rare and beautiful and dazzling.

We were allowed ice cream sodas once a year, sometimes twice if we performed at some big music school concert. But for the most part, once a year. Last day of school an ice cream soda. A celebration of surviving earnest young teachers with ideals and bitter old ones with rage and rulers, quizzes I could never study for, school projects I attempted to finish last minute in a midnight bathroom, classmates with newer clothes and meaner dispositions, and tougher kids in other classes really pissed off about things none of us ever decided for them but somehow ended up being responsible for.

I don't remember who was behind the counter or what flavors I picked. Or why it was an ice cream soda, not a sundae or even just a dish. Perhaps it was the lack of daily sodas in our lives. And a sundae was as foreign to my parents as the Episcopal church. I don't even remember liking my yearly soda or not. I just remembered entering, entering that soft safe brown and visiting briefly a place of utter beautiful dazzling, rare richness.