Sunday Memories of Being at Home with Fish 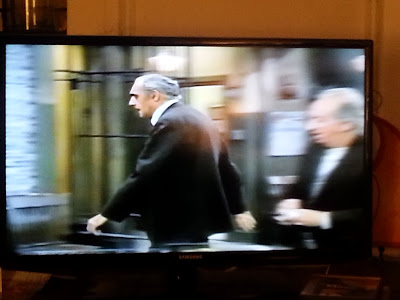 After months of summarizing horrifying atrocities and political nightmares, returning home took weeks.  Even if I was already inside the apartment.

It was the gathering of pieces and reconnecting heart and soul molecules that took time.   Sleep helped but only so far.

Other times it was watching documentaries about eccentric artists or stand-up comedians or visionaries.

But there was this one time, where the only thing that worked was curling up on a kitchen chair and watching every Barney Miller I could find on youtube.

Morning coffee in hand, 12 hours would suddenly pass.  I did this for weeks.  Nothing much else happened.  Just heart and soul coming back together into a recognizable sense of self.

I didn't give much thought as to why or how or the deeper meaning.  I just soaked up every second of every story line, every actor, every character actor...

...and then it was Abe Vigoda.  Detective Fish on Barney Miller.

And why and how I had lived in Barney Miller for all those weeks suddenly became crystal clear.

It was where I returned to the city I remembered, the streets I ran a little wild in, the friends I missed.

Like Det. Fish and Yemana (Jack Soo whose voice I knew intimately from my beat-up vinyl record of Flower Drum Song).

They were where I could hear and see my New York again.  And when I was in pieces, they showed me the way back to that home, back to a heart and soul I grew up with.

Sunday Memories: When the City Was A Black and White Photograph