Sunday Memories: Beneath Your Surface 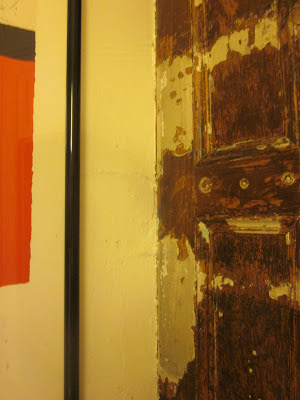 The Miro poster had been found on the street, but I prefer to believe that it had run away from an unloving home because the minute it hung over the stove it looked like it had always been there.

And the cupboard next to it, stripped twenty, maybe twenty-five years ago by a generous neighbor for about $100, maybe less, probably less, revealed almost a hundred years of secrets from all the other people who had lived in that kitchen, each one passionately painting over the previous version of a beautiful haven.

At that time, that cupboard was all I could afford to have stripped.  The rest of the house stayed buried under a century of paint and every decade or so, I'd add to it, resigned that there was no other choice.

Once in a while, while cooking tea, or praying coffee would percolate faster, I'd stare at the remnants left from all the painting over of other people's histories and wonder what each color meant to each person who had put it there.

But now these different days were welcoming in a new era.  And those histories, as much as they told interesting stories, had never been mine.  I wanted a fresh beginning, not one that started with a yet another covering over of a century's worth of paint, but one that removed and revealed what was beneath the surface.

Even The Cat Was Found On The Street