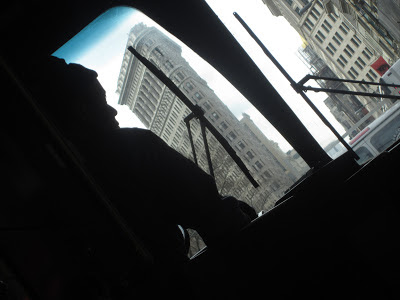 "He's a cowboy," Florence would hiss.

I'm not exactly sure where she got her terminology.  She was in her sixties the first time she went west of New Jersey.  Maybe, watching westerns as a girl in Bushwick or the Lower East Side, she got the idea that only a cowboy would drive a vehicle reckless and fast through millions of cow-like traffic.

It wasn't until Bucko's blog that it dawned on me that the world of the cowboy was a bit larger than Blazing Saddles and New York City bus drivers.  (I am purposely ignoring the two westerns I was dragged to see in 1981 at the St. Marks Movie theater because they were being screened with irony.)

So, as the M3 bus driver barreled down Fifth Avenue, zipping in and out of billions of cars and taxis and pedestrians and those bicycle rickshaws, imagine my surprise when I heard myself mutter, "Cowboy!"