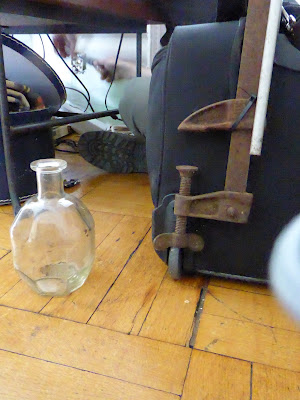 Not a lot of guys know the old land-line wiring.  One guy didn't even have a clue where to start with the wall phone.

Mr. Verizon did.  He not only knew the wiring, he fixed the phone.

There in the middle of all his tools was a vase.

"You need that to fix phone?"

"Nah.  I just pick up stuff from the dumpsters and the basement garbage.  I also just got that vise."

He even took home cats dumped in basements.

Since almost everything in the apartment were hand-me-downs or found on the street - including the cats - we got to talking.

His family's been here since 1812 or 13 - a long, long time - and one branch owned Farrell's.  Not his branch though.  He wouldn't be working Verizon if it was.

Commiserating about the city going down the toilet, he shook his head.  "They're selling the city on an old reputation - tough, gritty, a real city... but it's not anymore."

Then he packed up his tools and vase and headed out to the next call.

Sunday Memories: Even the Cat Was Found on the Street