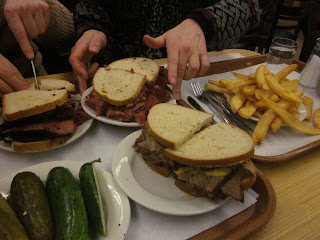 There were only a couple of places outside of the apartment's kitchen that we ate in. Maybe a Chinese restaurant once or three times a year. Definitely Chock Full O'Nuts. The luncheonette on the corner of Delancey and Essex for pretzels and a glass of seltzer.

And Katz's. Our meals then were usually kept to hotdogs and tons of water from the water fountain, now a bona fide antique but then just a great water fountain. My dad, at frequent, irregular intervals for decades, would often sang out "Send a salami to your boy in the army". (And when I went to study in China and wrote him begging for deli, he actually did. The Chinese post office refused to let it in the country and it arrived back in New York six months later, completely inedible.)

Once I got my own job and my place and my own money, I expanded into the rest of the menu. Still, after tougher days taking care of Florence, a hotdog from Katz was the only thing that soothed.