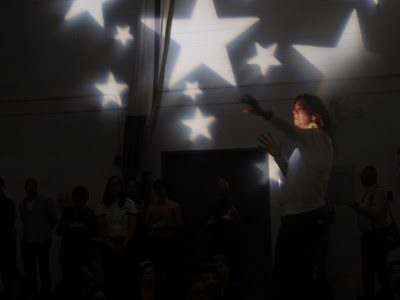 Fifty days after leaving Egypt, Moses went up the mountain to receive a lot of stuff.

But this woman at the all-night Shavuot celebration told a different story.  Gathering all the dancing, singing, cheesecake-eating community around, she unfolded a tale of Moses' sister, Miriam, who on her way to get water, stepped into the the core of all that Moses was about to receive.  And there an old woman told her that while Moses would be doing some heavy lifting, she, Miriam, would bring back the gift of space.

For it wasn't the water that made a river, but the space, the canal in which it flowed, that made it a river.

It was that space that Moses created when he parted the Red Sea and that space that the Hebrews were too frightened to step into.  But Miriam did, singing and dancing and leading the people to the other side.

And it was that space between words that would guide, not the words themselves.

So Miriam took that gift and brought it back and it became the space that allowed water flowed in the desert.

Bad Girls of the Gym