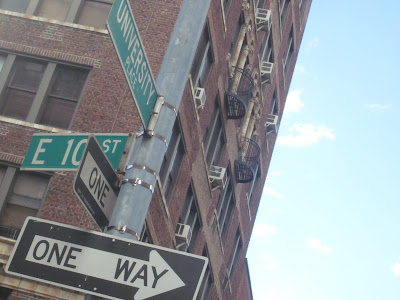 We were at the end of this particular meander.  I picked University to walk up.  It would lead us closer to that warehouse sale promising expensive sneakers priced down to our meager budget.  And besides, it was prettier and less crowded than the other streets.

University was full of many memories, but as stores and bars and clubs melted into newer, richer people's idea of fun, what I remembered was becoming vague fog.

Except for the corner of 10th Street where for a couple of rich years I got to work with a great healer.

That was eleven years ago.  And, after his funeral, I never once glimpsed his wife on the street.  So I assumed she moved away from emptiness that happens when your comrade dies.

Yet suddenly there she was.  Eleven years later, looking as beautiful as ever.

And apparently looking for a cab for her son-in-law on his way to the airport.

We hadn't met until the funeral.  We hadn't spoke since.  But I knew her face immediately.  Their love story, unbeknownst to me until I heard his eulogy, was what kept me listening to hope that I too would meet my comrade, no matter what age I was.

All the cabs were busy or wouldn't go out to Queens before the shift changed, even with a bribe of double the fare.

How do you repay someone whose love guided absurd risks that led to your happiness?

You call Delancy Car Service and wave down the very nice Lincoln Town sedan that actually did show up in "five minutes! five minutes!"

A Car Ride To The Doctor

Of Men And Mice