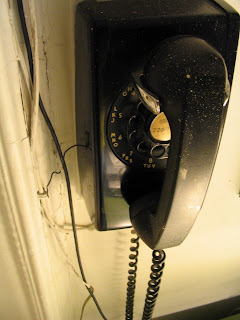 A long time ago, like in the 1970's, when the phone company owned everything, this was the official phone of the apartment. Any extra phone, you had to pay extra. Nobody paid extra. We all had illegal phones. All wired up to this main phone with splices and electrical tape. If the phone company suddenly appeared at your door you had to quickly dismantle all the jerry-rigged illegal phones and hide them.

One time the guy showed up unexpected and I got my hair wet so he'd think I had been in the shower and that's why I kept him waiting outside the door, but really I was dismantling our extensions. And another time the phone guy grilled me for 5 minutes insisting there must be other phones in the house because he couldn't believe three girls could share one phone that resided in a then bedroom. I insisted we were all very close and could. He knew I was hiding ill-gotten equipment.

Then everything changed and the phone company owned nothing. The height of modern technology was pushing buttons instead of sticking fingers in holes. That and longer cords. Then things got crazy and you didn't need cords or wires at all.